Screenshots of some of Angies recent squirmy projections when challenged:  Click for link to Google Drive re Angie sourced by Hoaxtead Researcher 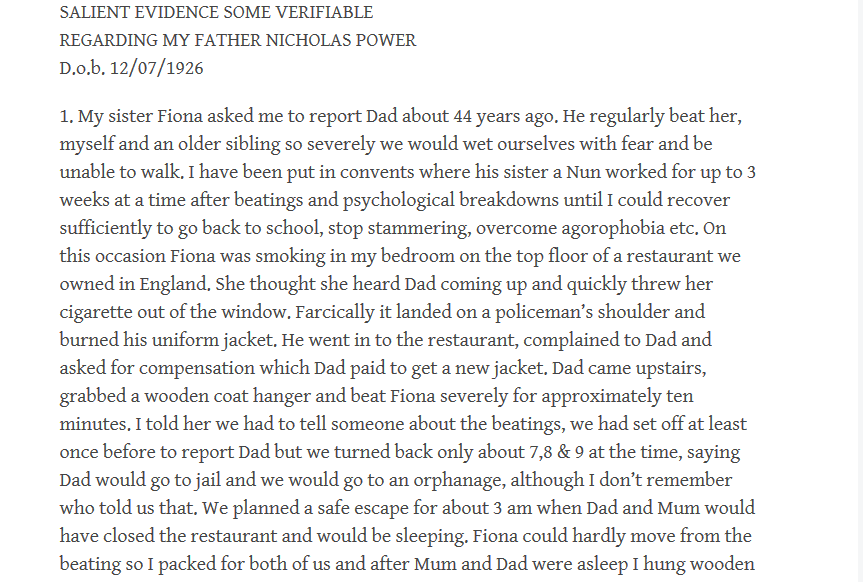 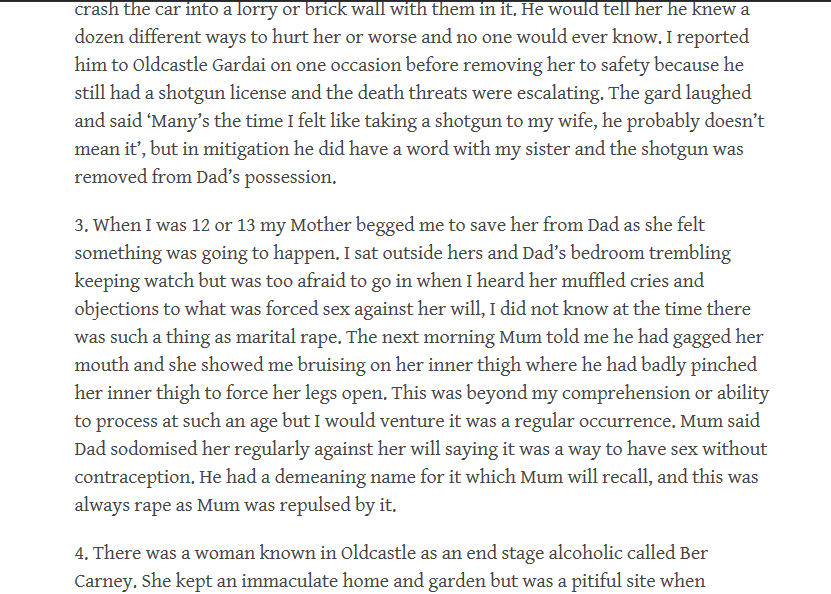 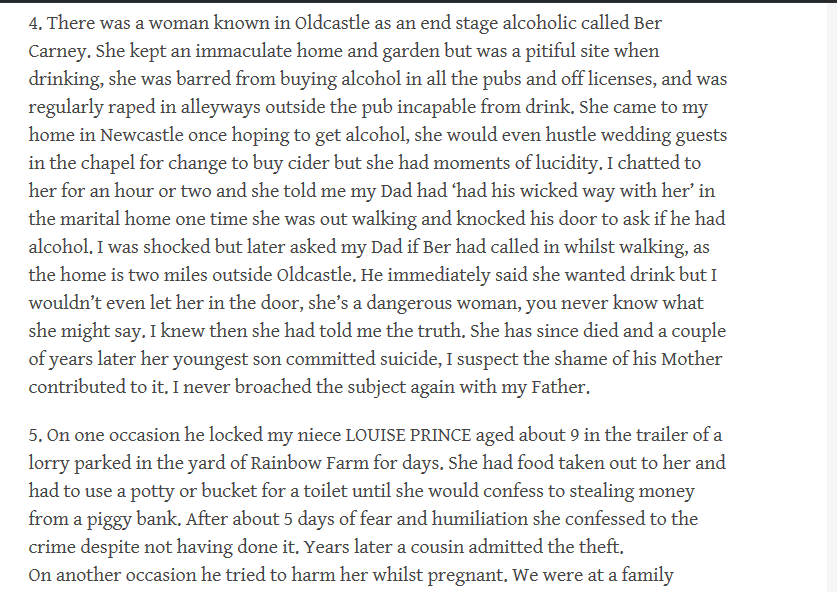 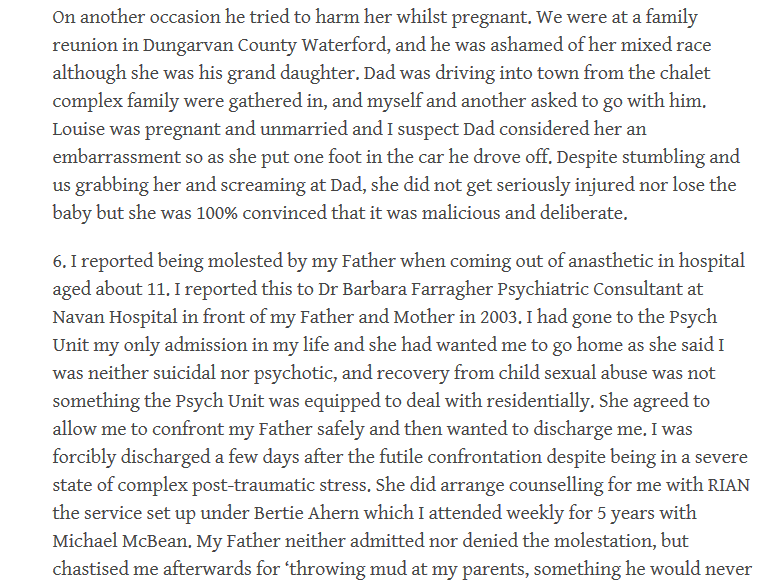 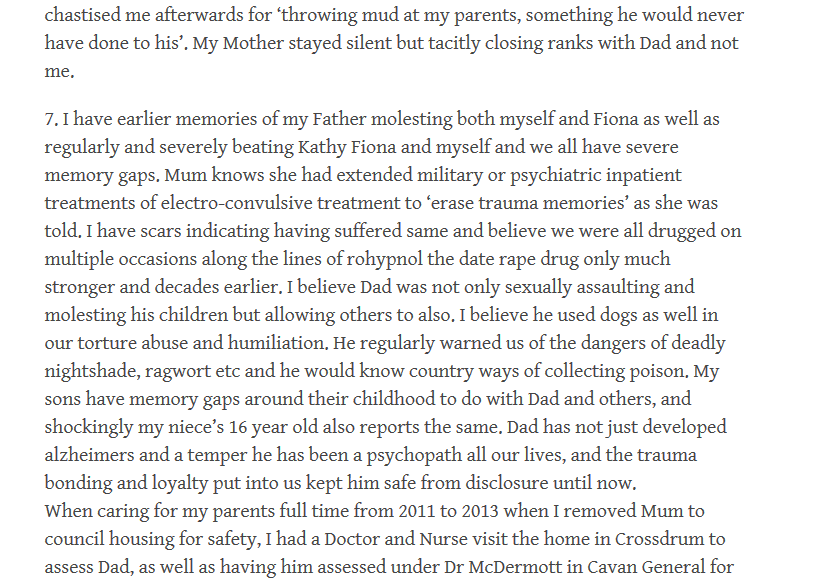 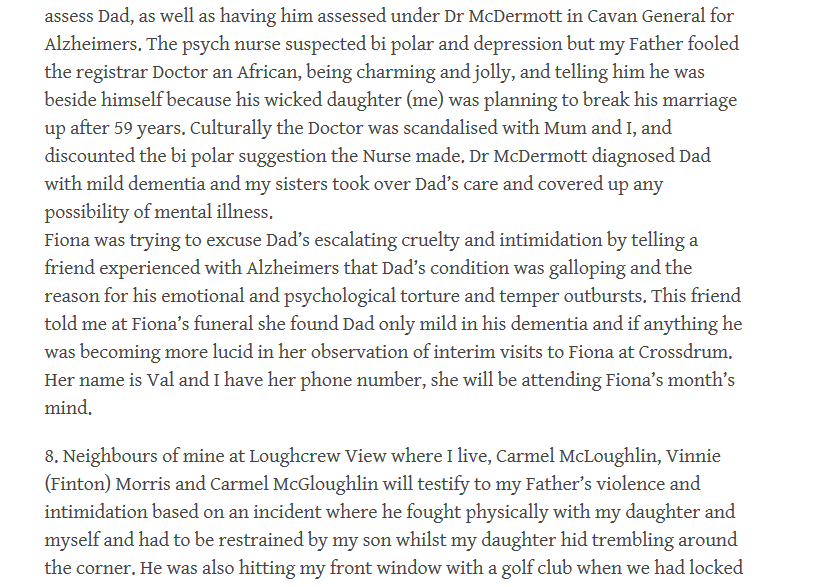 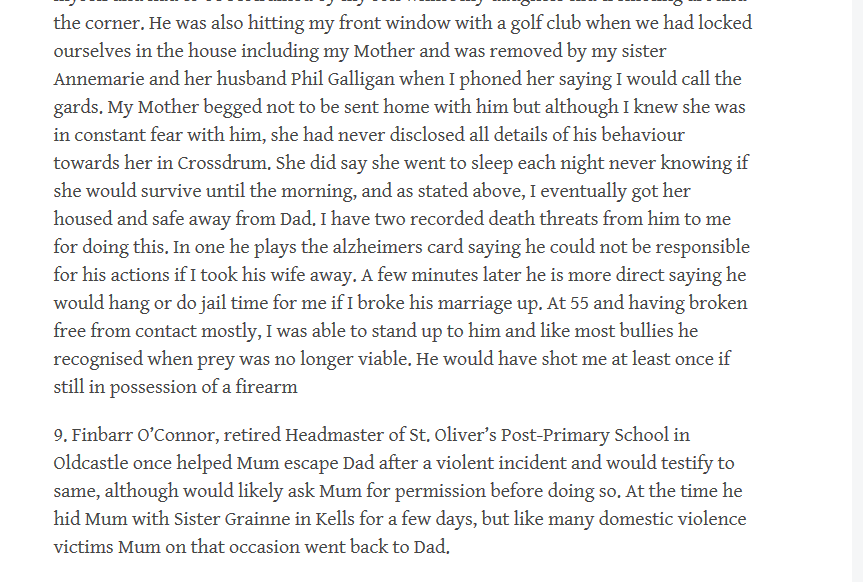 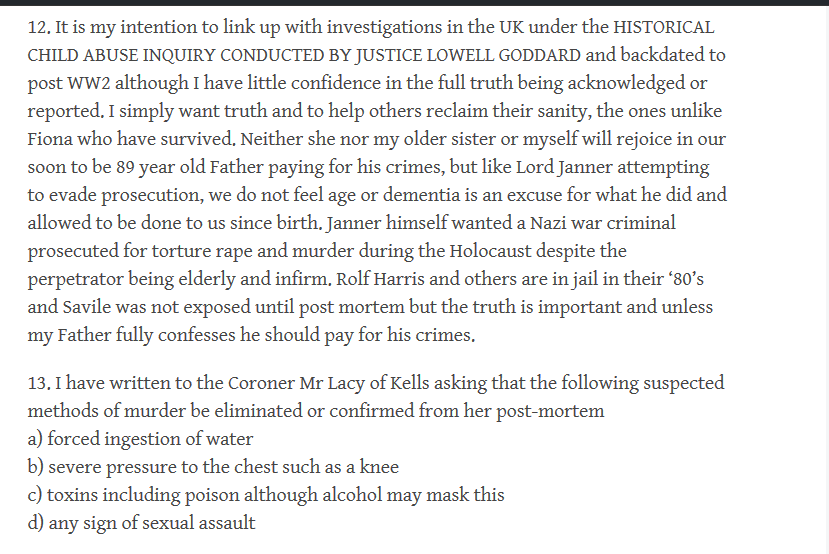 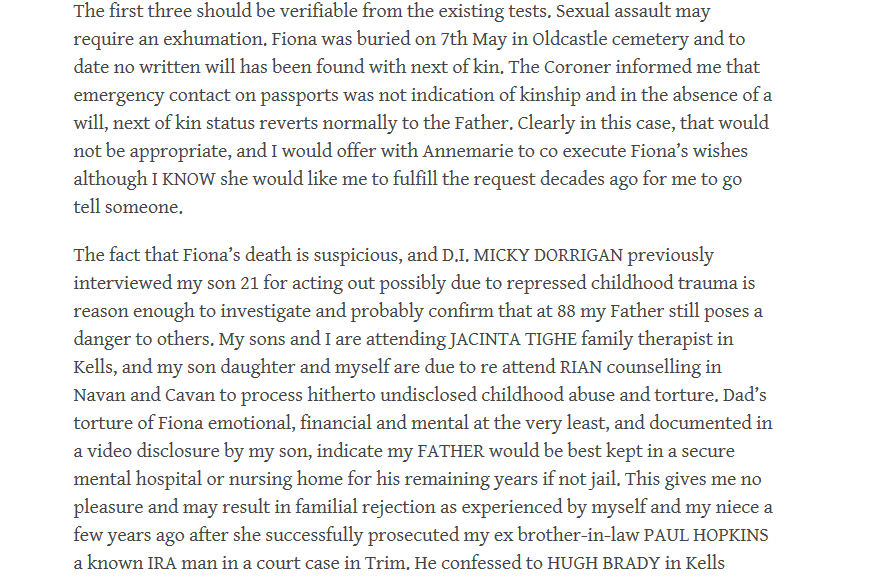 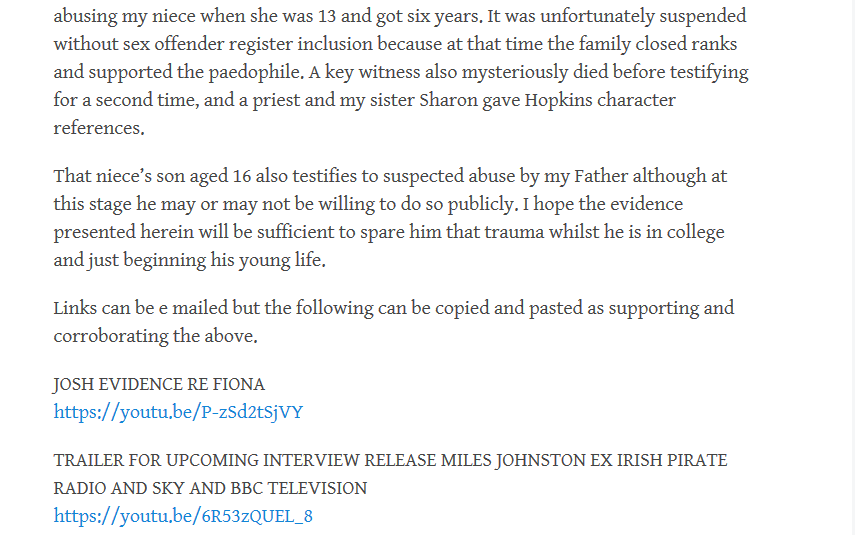 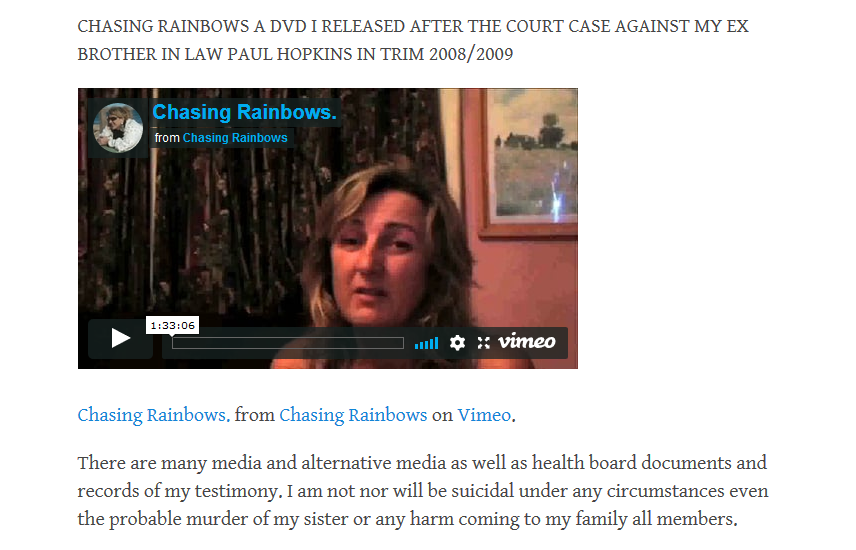 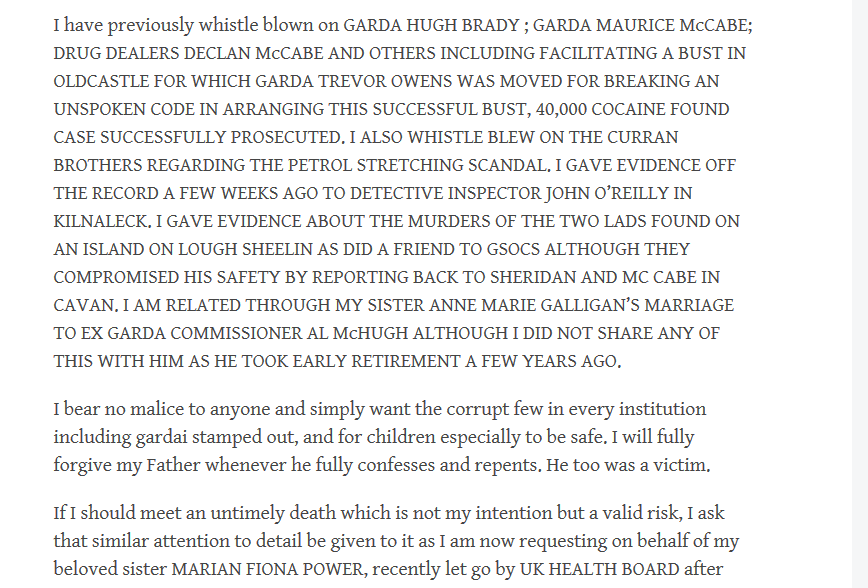 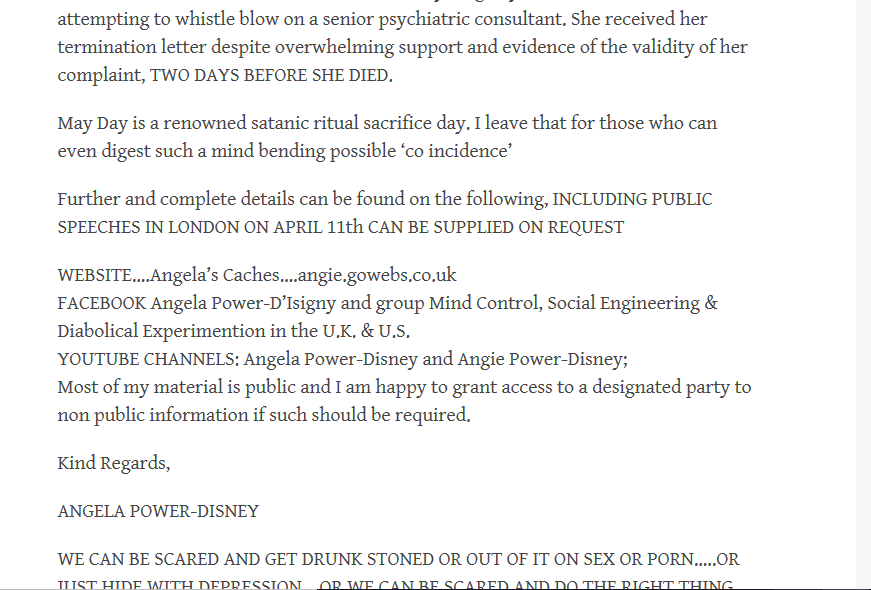 Angelas’ ridiculous false allegations that either Hoaxtead Research or I sent malicious mail to her community were recently re aired with the vile Heather Brown. If Angelas’ community or family and others defamed and harrassed, threatened by her pals, don’t try and divert attention Angela, you are only digging yourself deeper and proving yourself to be a compulsive liar and spiteful, dangerous bitch !

Sheva….. Btw, Angie, you’re welcome for me pointing you to the evidence, that you reckoned was destroyed when your defamatory videos were struck down….. You’ve repeated it all, enough times, and the screenshots bear that out, from 3yrs ago….. pathetic, you are. I really have no pity for you, as the Karma deserved begins to bite. Thankyou though, sincerely for being so stupid.

Click for video: Angela Power Disneys 1st open snipe at me tho covertly done 3yrs ago! Plus playlist of others’ also attempting to cover their lies, by smearing me & other good advocates

END_OF_DOCUMENT_TOKEN_TO_BE_REPLACED

I missed this at the time……. this needs to be shared amongst groups working to change things for children & survivors of child abuse.

I have my own story to tell, of the various ways, that I have been treated.

Yes, shocking, perhaps hard to read…..People have made allegiences, friends, but abused again because they provoke and take advantage of frightened people….offering the ‘cure’.

I was shocked today, to see the IICSAUK retweeting Natasha who has never stopped allowing Sabine, Belinda & other suspects posting on her blog.   Just the other day, I was disgusted to see a hollie grieg poster, commenting.   Malcolm Ogilvy or George Antonio, AKA George The Greek Trucker on youtube, recently posting videos of the Hampstead children….which has an order banning it in the UK…… How come ??????  Researching Reform has consistantly promoted Andy Peacher, who hosts FreedomTalkRadio , promoted Tory Smith, Kevin Annett, Freeman on the Land artists, Tom Crawford, John Paterson, etc…..

I support the IICSAUK.  I want it to be effective.   I want Survivors of abuse still suffering to recieve recognition if they have special needs, caused by the abuse, or diabolical treatment, mostly, by the system.

If nothing is done about the vile abuse, I’ve suffered online, since I decided to speak out about the hoaxers/scammers/fraudsters  but worst of all amongst them many child abusers……proven guilty….then I will begin publishing even more

Please do click the link, read thru the comments

Thanks to un charmed, unchained, bwitchy

pwoo ~ who I can’t help giggling at ~ she reminds me of Tweetie Pie lady ~ cept she ain’t tweet.  Anyway She, Angela Power-Disney, David Shurter, Belinda

McKenzie, have all smeared, lied, falsely accused me. They’ve done this to others.  I,m disgusted that they’ve tried to drag really good people down so they can make off survivors backs.  SatanicPanics feedstock?

Please click the link above ~ I reported the whole channel & ask others to help, protect 2 children from further harm.  Are many genuine CSASurvivors, Campaigners, Whistleblowers & Activists, unaware ?

Questions: Validity of the liars falsifying ‘evidence’. Turns out Satanists ain’t all good. The really bad ones are Angela Power-Disneys friends/advisors! Pls read also comments, for links to evidence.