As we build a strong foundation to support victims/survivors of abuse and protect children better. By sharing knowledge, expertise and information regarding the issues that challenge society to now do better. IICSA and The Scottish Inquiry are only going to as good as the participants make them. Check out the links on The Real Fresh Start Foundation and watch as we build an informative and educational tool. or better still, participate and/or just share.
As we clear out the charlatans and make way for the genuine people to be heard moreso, as we tackle false allegation creators, enablers, promoters and fake compensation claiments, we can hear the true voices, suppressed and silenced for so long, safely via The Truth Project and there are many good people/groups with integrity for support, too, which we will be adding as we can. . (I will update the blog with more details for support in place for Scotland Inquiry participants)…..

I’m creating some montage videos, to give quick information to those working within services, that are too busy to have been online enough to have realised the dangers posed to our inquiries, by various shades of perp, fraudster and enabler, deceptively pretending to aid survivors whilst fleecing them in many ways. Sheva.

This is very important to everyone interested in child protection.
It is really despicable that most of those who are responsible for initiating this hoax were also those who conspired with Belinda McKenzie and now run Fresh Start Foundation, to hijack our Anti Child Abuse Rally, 2010.

FSF are planning to hold an independent Scottish Inquiry, inviting testimonies from survivors which given their behaviour is very worrying, indeed.

There is evidence here:  The Outlaw Jimmy Jones Blog Recent Posts & comments: more evidence & links.  They and their followers also have form for attacking groups, advocates for & victims/survivors of child sexual abuse.
Thereby, overwhelming social media with fake news, promoting liars & scammers whilst suppressing the courageous survivors and groups, events working with integrity.
In other words, they are causing child abuse, harrassment and further abuse to victims, yet are claiming to champion the cause for child protection.
So I ask for all concerned with this issue to share this and help us to stop them and for now, at least warn your networks to protect victims from them, forewarned is forearmed.
Sheva

Please read the whole post at Hoaxtead Research and join the conversation.

Following up on yesterday’s post about the EU’s impending crackdown on social media companies, we’ve hammered out a very rough draft letter for our readers’ consideration. We’ve attempted to cover as many points as possible without inundating the poor Commissioners with so much detail that their eyes begin to roll back in their heads…but enough that they can get the gist of what happened, and understand how social media platforms must be called to account for their role in the Hampstead SRA hoax.

If you can see points we’ve overlooked, or bits we’ve included which we could probably have left out, please let us know!

We are a UK-based community group who have been working for nearly three years on convincing Facebook, Twitter, YouTube, WordPress, and Google+ to remove thousands of illegal posts and videos relating to a fake news story which was deliberately put online and made “viral”… 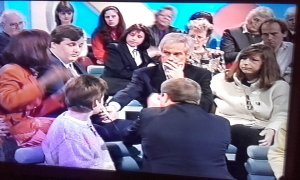 3rd time on Kilroy. I did not approach the press re my case, which was real, Angela, Heather & Sharon. Webb v Webb was against Step relatives, mine was the first against a natural father, the time limit was 3 years from the time the effect was realised, I had lots of evidence, or it wouldn’t have gotten as far as it did. How dare you vomit all over something that took years of effort, pain, reliving, detailing abuse, in a way, I had not had to before.

I have been subjected to the same dynamics as I experienced as a child, teen and adult survivor of CSA, DV, Bullying.  Dealt by people who claim to be heroes.  But, they have merely jumped onto this issue to suit their own agendas, beliefs, pockets.  In some cases, it is even more serious…. to deflect away from their own abusive behaviour towards their own children or to protect convicted paedophiles

They are trying everything they can to prevent people reading truthful posts and comments, as Hoaxtead Research have, without intending to, found the evidence that shows very disturbing happenings. Not least Cats, mindless garbage, she who recently insulted male survivors; calling them twatterboys, there is a hate campaign that has raged on some of us, longterm….. We are helping each other, protecting and exposing the grief they are trying to cause, ugly, vile abuse, sacntioned, allowed and encouraged by those named on my blacklist and the perps or players listed with evidence files available, on those who are sdreaming that we’re all satanist paedos as loudly as possible….They gone and shown themselves right up, to the right people…. The spotlight has shone. No going back, this level of online abuse cannot be tolerated.

A worthwhile read : The Outlaw Blog….link below:

At one point he was on AFR with David Shurter and fortunately, pulled away upon realising that he had been sucked into a vortex of scammers and child molesters (David Shurter boasts about having raped, tortured and murdered children, like his cohort Fiona Barnett, claims to have witnessed murders, see my post The Real Deal and the Blacklist for evidence of the vile attacks and death threats towards decent advocates downunder, during the Royal Commission, when OpDeatheaters, pedohunters & well known hampstead hoax promoters collaborated to wreck survivors support groups, discredit good people AND even tried to defraud Tim Minchins fund for Ballarat Survivors…..   The same groups that troll and promote Fresh Start Foundation now and also support free energy scammers like Hope Girl #QEGScam and #fukushimafrauds aka #fukushimahounds.     Various FMOTL and Sov Cits also collude and hang around anti CSA events looking for victims or punters.  So since Danny pulled away no longer able to be used by them, they turned vicious, much like they have to me and anyone, since we exposed the hollie case and all involved as liars, frauds, child abusers and those who support them……  Hoaxtead Research have collated evidence for 3 years now, that has proven this…. hence HopeGirl, Wesley Hall, Angela Power Disney and WildCat, Malcolm Konrad Ogilvy and GeeGee Tees gangs colluding to create the ‘Hoaxtead Exposed’ blog which was copied onto Fresh Start Foundations blog under the heading ‘The Real UK Satanists’…….

Source: Erring on the side of caution

Given the personal attacks caused by collaborators with this guy, that have effected good people, other advocates, their families, children, including mine……  I have little sympathy….my comments and others, paint a clearer picture than the comments on YouTube….. I hope this kind of harrassment, towards innocent people, will be stopped.. These so called victims, are in fact themselves, targetting many.

Angela Power Disney & her latest collaborator, Heather Brown mocked him, recently…..  They havn’t let up on me either….

This is why I have warned the networks concerned with child protection.  Groups involved with survivors, inquiries, investigations. need to take seriously the harm caused.

Without directly or openly becoming involved, you can help, by reporting videos depicting the two hampstead children…. photos also….It is horrifying, that so called advocates against child abuse are flying in the face of true advocacy with impunity. Unless, we work to stop them and put pressure on the platforms allowing scammers to lead the narrative, using children as a shield to scam and abuse vulnerable people.

And, she cannot deny picking on THIS DISABLED WOMAN, me.  Thankyou so much Hoaxtead Researchers, commentators, investigators, readers, contributors, supporters, of this ‘David V Goliath’ fight.  Thankyou you all for the resiliance, perseverence, integrity, thorough research, evidence based information and for bringing together good people.  People of many faiths and a people with no spiritual beliefs.  But all shocked, disgusted at the cynical viralising of lies.

Thankyou. El Coyote for sending evidence to my local council, police.  As I couldn’t.   My GP was very concerned.  Yes, I have been effected by their bullying, humiliating lies, threats, so has my son.  My local services know my history well.   There is a long paper trail, going back to when I was a teenager, that was why my case had enough to go forward with a civil case in the 90’s.  These days, it could have been a criminal one.  In other words, there is plenty of evidence on the system , evidence.  Apart from the thousands who know about me, my case, the rallies.

Child sexual abuse has never before been as recognised, or spoken, written about, investigated.   The inquiry has spent millions, mistepped, ill prepared.  So far there is little sign of more actual effective help for survivors.  Some have serious injuries, physical, mental, addictions, emotional.   Only recently, a maternity unit has been set up, in London, to cater to special needs of CSAvictims/survivors, so there are signs of growing awareness becoming effective action.

VoicingCSA is going from strength to strength.  I’m hoping to get well enough to engage moreso.  For now though, I have a laptop again.

So, I will be able to write more fully.  There are though reasons why I will have to hold back, to not compromise investigations.  Source: Angela’s lies: Garden fence gossip gone mad

Thanks to un charmed, unchained, bwitchy

pwoo ~ who I can’t help giggling at ~ she reminds me of Tweetie Pie lady ~ cept she ain’t tweet.  Anyway She, Angela Power-Disney, David Shurter, Belinda

McKenzie, have all smeared, lied, falsely accused me. They’ve done this to others.  I,m disgusted that they’ve tried to drag really good people down so they can make off survivors backs.  SatanicPanics feedstock?

Questions: Validity of the liars falsifying ‘evidence’. Turns out Satanists ain’t all good. The really bad ones are Angela Power-Disneys friends/advisors! Pls read also comments, for links to evidence.

A couple of days ago we discussed the case of the Musas—a case of horrific child abuse linked to the belief in witchcraft—and pointed out that so-called ‘child protection activists’ Belinda McKenzie and Sabine McNeill had come down squarely on the side of the abusive parents.

Thanks for confirming for us,that we survivors are strongly supportive of each other .    I share the vision expressed at the Voicing CSA Meetings. Videos are on Vimeo.

Please post links in comments till my lappy is fixed, meanwhile the Justgiving Appeal is on our pages & i follow The ShatterBoys blog, check sidebar.

Working with existing servces maximises choice and the need for independent ones is vital imho too.  I wish every success to you, four Shatter Boys on your bike ride.

It fills me with hope and respect.  Peer support to aid Survivors who wish to engage with the Inquiry, solutions for NOW and engagement for effective ways to create change.

Outstanding.  From a shatter girl

HoaxPolice Debunking Scams and Hoax - SCROLL DOWN AFTER SELECTION